The Scott Romig Band was formed in 1992. The group evolved out of my father's orchestra, Romig, Carney and Lewis, a leading Philadelphia society orchestra that performed around the country and abroad for many years. Among their most memorable engagements are several trips to the White House.

Retaining a few of my father's band members, we continue to perform Swing, Jazz and Dixieland renditions of the great standards by Cole Porter, George and Ira Gershwin, Glenn Miller and the Count Basie Band. As well, a large part of our repertoire consists of 50s Oldies, Motown, R &B, Soul, Funk, Blues and Reggae – and plenty of "classic rock," played in a very dancable way. In fact, if the band has a "signature" style or sound, it would probably be our bias for straightforward, vintage rock n’roll...Van Morrison, the Stones, Bonnie Raitt, Chuck Berry...

In short, the main objective of the band is to appeal to all types and all ages by playing authentically within the widest range of musical styles possible. It would be typical to hear the music of, say, Aretha Franklin, Duke Ellington, Eric Clapton, the Temptations, and The Dave Mathews Band during a single performance set.

Our most recent notable date was the Reptilian Cotillion benefit at the National Press Club in Washington, DC.

In addition to occasional mention in The Philadelphia Inquirer , the band has been covered in national publications such as In Style, and Conde Nast Bride’s. 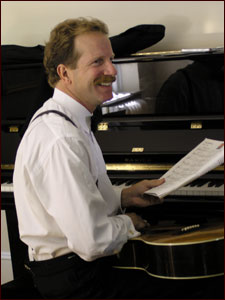